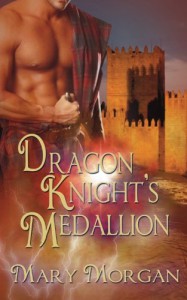 Stephen MacKay and his brothers were once revered Dragon Knights, until the machinations of an evil druid result in the death of the MacKay sister's death, at the hands of her brothers.  Stripped of their relics and cast from favor by the fae, the MacKay brothers are wandering in despair, trying to fill this hole in their very being.  Stephen has tried to find solace from his guilt and rage in the church, donning the habit of a monk.  He knows not of his brother Duncan's redemption, and is plagued by visions of death that bring him disabling pain.

Aileen Kerrigan is no stranger to magic, but there are some things, including time travel, that she believes are pure fantasy.  So when her father reveals a discovery unearthed in a Scottish castle, tied in with the revelation of a vision of Aileen's destiny had by her mother years ago, she is torn between feelings of betrayal and concern for her father's sanity.  Then she stumbles through the veil of time and into the arms of Stephen MacKay, helping him find love and redemption.

Ok.  After finishing this one I'm not really sure why I requested it.  I blame a mixture of curiosity and 3am.  Based on my review of the first book in the series, Dragon Knight's Sword, I apprently found that one alright, so I went into this book expecting something fluffy, a little over the top, but not too bad.

I basically just read 400+ pages of nothing.  It took about as much time and effort as reading your standard 200 page romance novel, and that's not because I eagerly devoured the text.  I wouldn't really classify the book as bad, it just didn't really strike me as much in any way.

What I can say about the story - sex is sudden and explosive, descriptions are a bit overblown, and incredibly one-dimensional stubbornness and emotions.  I get that stubbornness makes for dramatic moments, and individuals don't have the instant clairty to consider a situation from all sides, but I can barely follow much of the thinking.  The sex is plentiful, even in marathons that are hilarious in consideration of the fact that they've been riding on horseback all day for days.  The characters are gorgeous, sexy, and passionate.  There is a dragon, magic, and lots of men in kilts.  There will be several other books in this series.  Read this book for the fantasy setting rather than the historical one.