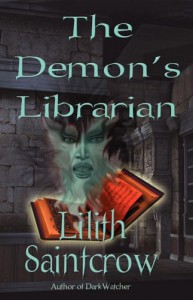 Demons, magic, and kick ass librarians.  How could I not read this.  It even comes with a dedication to librarians (awww).

Chess used to be your regular librarian, coming across a bit all buns, cardigans, and comfortable shoes at work, with her own life outside where she could let her hair down.  Well, somewhere along the line things went a little wrong and in taking things into her own hands her life goes down the rabbit hole.  Nasty tentacle things that go bump in the night are a good reason to start watching over your shoulder, and little does she know what's coming her way or what newly waking powers she possesses.


Ryan is something of a "hulk smash" alpha male, but it's balanced by his awareness of his need to control his "animalistic" urges.  Rather brooding and over-protective, but his job is literally to be over-protective.

Where do I even start with him?  He's the type of character that I wanted to punch in the face pretty much from the start.  He's the type of character who's only a "good guy" based on his faction, other wise he's pretty much a sleeze doing the bare minimum for his job until something better comes along.  You want him to be a villain so you can hate him without guilt.

Chess is pretty bad ass, she ends up as a damsel in distress situations here and there, but those are largely to being dropped into dangerous situations that she has no preparation for.  When push comes to shove, she will (and does) fight her way out and hold her own.

The cover on this particular edition is all glistening pectorals and other muscles.  I was definitely expecting something bordering into raunchy.  It really isn't, with very light romance and nearly no lusting, and any consummation happening completely off screen.  The focus is on the dark fantasy and danger.

Advanced Reader Copy copy courtesy of BelleBooks via Netgalley; differences may exist between uncorrected galley text and the final edition.