probably not going to continue with this series 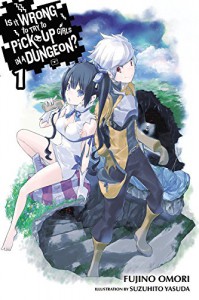 So, I'd like to preface this review by saying I think the book definitely suffered from the double (or triple) translation it went through to end up in my library.  It started as an anime, then was made into a manga, then into a series of "light" novels... and into English.

Is it Wrong to try to Pick up Girls in a Dungeon? has some pretty standard anime hallmarks - including a guy surrounded by women that he wants to pursue and them being variously out of his reach or multiply (and awkwardly) interested in him while he fails to notice.  Our protagonist's whole purpose in being an adventurer is to basically form his own harem of adoring ladies.

There's a lot of boobs.  Boobs in the way that, well, teenagers with no experience with boobs fantasize about them.  They're the defining characteristic of a few characters.

We've got an oblivious male-led romance, oblivious to the interest in those around him, oblivious to what's happening to him, and probably oblivious to what to actually do if he actually got all the women he's dreamed about.  Also, having a power where you get really powerful really fast just by REALLY REALLY wanting it... is pretty broken.