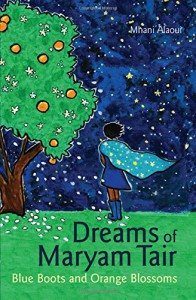 Dreams of Maryam Tair is nested and parallel tales, knotted together by lives and stories.  It is a book of culture, belief, myth, legend, and magic.  Revolt in Casablanca, intertwined beliefs, and lives written out of history.  Sheherazade and Lilith, God and Adam, a story that has happened and is yet to happen, and a girl who carries the scent of orange blossoms.  The power of words and knowledge.

"Her mother taught her how to create talismans from discarded words and objects. And Zohra knew, instinctively, that the small pieces of paper or raw leather that were given to barren women and impotent men were covered with the very signs and symbols that she had glimpsed in the Green Book and that were forever inscribed in her memory. She poached in the green pastures of endless phrases and wisdoms with her own chants and incantations. She transformed old men's fortresses into wild pastures where jealousy, love, and revenge acted out their own tragedies. She conjured magic by dismantling the text, cutting words and sentences out, creating fury out of order" p.36-7

Alaoui has beautifully woven together elements across myth and legend.  Most notably of Sheherazade and her stories, and of Lilith and Adam.  There is magic in her words, and challenge.  Eve's crime was curiosity, Lilith's crime was independence and resistance, while Adam submitted to God.
The story of Maryam Tair is filled with the horrific and fantastic, enshrouded within fantasy while returning again and again to touchstones of our harsh reality.  Born into a culture where demons are people and self-determination is arrested by constraints of law and religion, Maryam is a child too magical for the world at large.  She journeys far to attain her gifts, and everywhere she goes follows the scent of orange blossoms.  Maryam is the power of independent thought, the power of story.