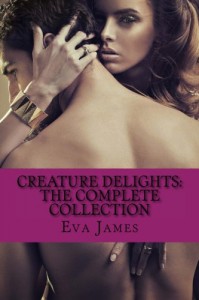 Here's the really short review: I was pretty thoroughly unimpressed with this entire collection of stories.

If you want more than that, read on.  Sorry if I get a bit crude.

From the Amazon teaser text:

The Complete Collection of the Creature Delights series! Warning: These stories was written to unlock your darkest fantasies and innermost desires. They are not for the faint of heart and are not your average erotica. They are not suitable for someone under 18 years of age. Read at your own risk...or delight! Inside The Complete Collection, you'll get 5 full stories, including: The Ogre’s Mistress The Forbidden Mermaid Taken by the Alien The Spartan and the Sexy Cyclops The Sexy Beast Under the Full Moon. Unlock your hidden desires! When you meet these creatures, it will not be fear you feel, but something else…something deeper…something sexier. Will you run for his life…or will you stay and discover a side of the mythological beasts that no one has ever known…?  Fans of Christie Sims and E.L. James will love this spicy hot romance series with strong, independent women and sexy, strange alpha heroes.

Taking a quick look at who Christie Sims is, sure, I'll say the recommendation is about accurate.  I generally don't take comparison with 50 Shades of Grey as a positive endorsement, but I've come to take it with a grain of salt since it's used so broadly.  I don't think 50 Shades particularly matched any of what it promised, but it was supposed to be this crazy hot kinky book involving a super rich dude with issues, and since none of that even comes close to applying to Creature Delights, I have no clue about that part of the recommendation.

In Creature Delights the characters struck me as rather basic and two-dimensional, the story-lines all following the same basic plot, and the sex as pretty conventional except for the whole "monstrous" love interest thing.  Really the strongest reaction I had to the stories was extreme confusion as I tried to figure out the anatomy and geometry involved.  If we're talking something with say average human proportions scaled up... that does mean other things are scaled up, which makes accommodation by a human female a little more involved, and receiving from a human male a little less... filling?  And I'm still trying to figure out how one would put their head between a mermaid's legs.

Some of my dislike does come from the format.  There's a reason one of the common writing suggestions is to read your work out loud.  Audio books bring out the flaws in the writing, and this applies even to books I love.  Sometimes I just can't do the audio book for one reason or another.  I could have skimmed this book and been done with it very quickly in print, which would have made some of the heavy word repetition less noticeable and generally shortened this ordeal.  I honestly also had issues with the narration, how words were emphasized was just off, and the accents were painful.

As for the individual stories, at the risk of spoilers, they're broken down below.

The Ogre’s Mistress
Woman goes hiking, get's herself injured, is rescued by an ogre, they have improbable sex, and declare their lifemate intentions.

This story loved the word "grunt."  So much grunting.  I probably wouldn't have noticed this nearly as much if I was reading instead of listening.  Also, this story was published in 2015 and is assumably contemporary, it doesn't particularly fit your character for her to use "cellular phone" instead of "cell phone," and "man bun" isn't a new thing so it really shouldn't be blurring your idea of what gender the ogre is.  As an aside, it's a goddamn bun, not a "man bun," there's no need for that qualifier.

Were the story told from the ogre's point of view I'm pretty sure we would have gotten internal monologue along the lines of "Want to fuck, not eat stupid human."

When it comes down the the sex... it's just awkward.  Some of it's the writing, some of it is vocalization that makes me think of Bevis and Butthead.  But everything about the ogre is described as significantly large and generally scaled up from human size, so I'm pretty sure that sex isn't as simple as tab A into slot B, and it kind of takes some things right off the table with their height differences.  Look, I know women give birth, and yes, I'm aware that in the dark recesses of the internet you can find videos of "that shouldn't be able to go there," but the vagina is not a bag of holding.

It's a little hard to get past the accents in this one, and it would have been better off without them.

Taken by the Alien
Scientists doing late night monitoring and various sciencey things.  Aliens drop in for a short notice visit, lady scientist wakes up strapped to a bed in an alien ship (for safety concerns that she not fall off), finds out she's been picked up to be someone's mate, freaks out, then decides he's kind of hot, so why not get it on with him.

You know, nothing really stands out to me about this one.  It was there.  The change in character focus was a bit strange, but since the author hasn't actually been consistent in POV throughout the book, it is what it is.

The Spartan and the Sexy Cyclops
Widower Spartan goes off to address the monstrous violence against his city, finds a lady cyclops (who oddly reminds him of his dearly departed wife), and decides to get it on.

I feel this story could benefit with a stronger familiarity with the setting.  I'm not a history scholar, but even I was cringing at details here.  The sex... well it has the reverse of the problem of The Ogre's Mistress.  Sorry man, I'm not so sure you'd actually do much for her with that equipment, this story really emphases how much larger than you she is.  Other than that, there's really nothing to stand out here.

The Sexy Beast Under the Full Moon
Accused of witchcraft a woman runs from angry villagers who are scared off by a monstrous flying figure, the woman wakes to find her self chained up, accosted by uncouth minions, and brought to the "sexy beast" who gives her an offer she can't refuse (or at least, is more pleasant than running from angry villagers).  I assume they have sex and end up as some sort of life mates.

I just gave up during this story.  Halfway through the story, almost done with the book, I just couldn't bring myself to finish.  I'm sorry.  Also, the accents were even worse than those of in The Forbidden Mermaid.

This audiobook was provided by the author, narrator, or publisher at no cost in exchange for an unbiased review courtesy of AudiobookBlast dot com