Orcs are near but not an immediate threat, and things are uneasy.  A choice must be made, and the decision rests on Frodo.  Aragorn may lead the Fellowship, but Frodo is the one to decide where the Ring goes. He asks for time to consider and walks off to be with his thoughts 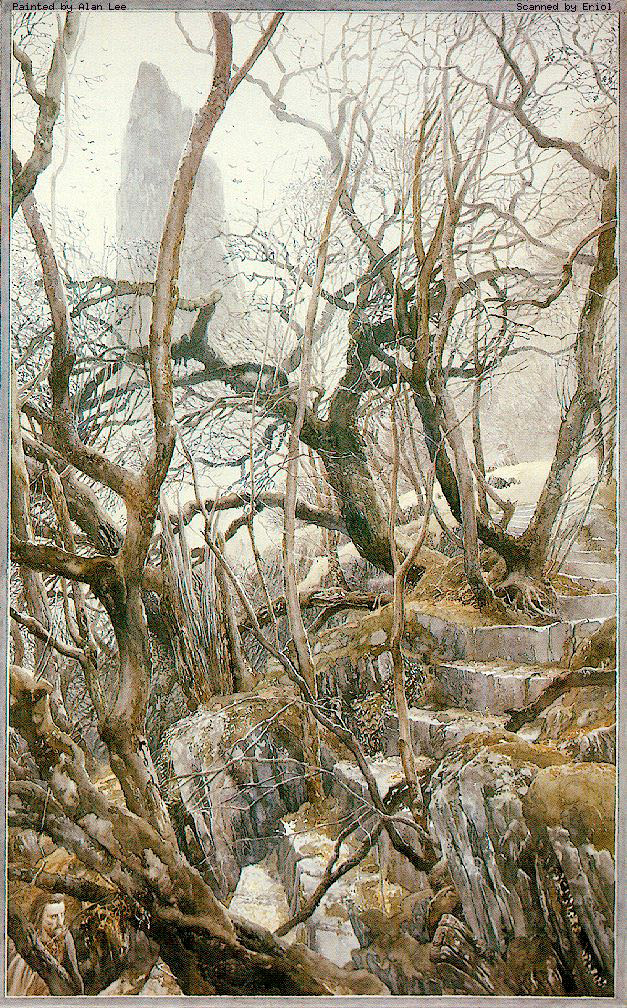 In the woods he feels as if unfriendly eyes are upon him and finds a smiling Boromir instead.  I'm reminded of the comment on meeting Aragorn the first time about the enemy seeming more fair.  Boromir seems more kind and caring than he has before, yet he is firmly under the Ring's influence.  He asks that Frodo consider his council, yet he rejects the council of others, believing that men are of truer heart than elves or wizards (which I find a bit ironic).

The effect of the Ring reminds me of the draw of addiction.  Boromir is definitely pulling on some deep seated feelings and desires, but ones that he knows to keep suppressed because they are not who he is overall.  He is an honorable man.  He is proud, but he also respects authority of those above him.  Even in his madness, his desire that men claim the gift of the ring, he feels that Aragorn should have first claim above himself.  The angry, grasping man he becomes is not his true character.  His shock, confusion, and dismay when he cries "What have I done?" I believe is entirely genuine.

Meanwhile, Frodo has run in grief and terror from Boromir while the Ring takes him on a trip, showing him visions of war across all Middle Earth.  It is a small margin by which Frodo avoids complete betrayal by the Ring, removing it before the Eye ensnares him.

The party itself wishes to journey to Minas Tirith if they could, though Gimli keenly desires to return to the heaven of Lothlorien.  Aragorn attempts to divide the party, allowing most to make way to the city and seeking to improve the chances of success on approaching Mount Doom by reducing the size of those slipping in.  The hobbits kindly tell him where to shove that idea, since there's no way they will willingly abandon Frodo, and Samwise has Frodo's measure spot on, stating that Frodo is working himself up to continuing his quest alone.  That alone is what allows Sam to continue with Frodo, realizing what next steps his dear friend would need to take to split off from the rest.


The film mixes the ending of Fellowship with the beginning of The Two Towers, which has some sense to it.  I'm going to attempt to save the combat and the death of Boromir for next week's review.

Some of the discussions from earlier in the journey down the river take place here, as they prepare to camp for the night.  Path to take, unease at the shadow under which they are operating, and a discovery that both Frodo and Boromir are missing.  Boromir's presence seems natural, as he collects wood for the fire, while Frodo appears at first unreasonably cagey then sensibly cautious as Boromir loses control to the Ring's influence.  Sean Bean does a masterful job, both as a maddened and repentant man.

As Frodo runs he sees visions, but less extensive than those in the book, and Aragorn does find him before he slips away.  He hears the whispers of the ring and rejects its call as he concedes to what both he and Frodo know must happen, the division of the party.  Merry and Pippin also sacrifice, realizing that Frodo is deciding not to hide but to leave, and that they stand a chance at allowing him to keep is freedom.  As for Sam's throwing himself in the river, attempting to catch up to Frodo, that whole scene still manages to choke me up a little.