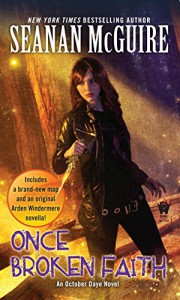 Seanan McGuire has become a go-to author for me, writing smart, fun, and compulsively readable books.

Once Broken Faith is the latest October Daye novel. Part of me just wishes that Toby could have a nice, relaxing vacation... but let's be honest, its when things go wrong that they get all sorts of interesting. Toby is due for that break, and she almost gets it, the story opening to an amazing scene of domestic "normalcy" (or as normal as one can get with fae teenagers running around) that rarely shows up in her life.

But as they say, no good deed goes unpunished, and returning with a cure for elf-shot certainly counts.

Now her brief interlude of peace at home with her built family is interrupted as she's pulled into the dangerous world of pure-blood faerie politics as the only changeling at the conclave... and then the first dead body shows up.

As part of the release of Once Broken Faith, and with the help of Penguin RandomHouse, I was able to snag some of Seanan McGuire's time and I'm offering a giveaway of Rosemary and Rue for readers new to October Daye! Read on!


Hello! First off, thank you so much for your time. I'm a huge fan of your series, particularly October Daye and InCryptid.

With so much lore built up over 10 books and various short stories, do you ever find yourself trapped what you've written before? How do you work through it?

I’m not trapped, so much as I’m given a better framework to play with. When you take your first gymnastics class, you’ll have one piece of equipment—the balance beam—and you’ll usually have a spotter, and you won’t be very far from the ground, because you’ll be so new. But as you get better, you’ll get more equipment, and more complicated techniques, and yeah sometimes it may feel like you’re not as effortless as you were when you were just striking poses on the beam and dreaming about going to the Olympics, but you can fly. I have so much equipment now. I have a flying trapeze. I can fly.

Is there's anyone's story you've been looking forward to tell that you haven't yet?

Alice. Alice Price-Healy is the point where the new generation of stories in InCryptid really gets underway—she’s our entry—and she’s had to wait a very long time for me to get around to her, because there’s been so much in front of her in the queue. It’s going to be so worth it, though. So worth it.

How plotted out are your major plot lines? Are things that happen in Once Broken Faith part of a plan from the start or something built up to in a shorter time period?

I plot a series like I’m planning a road trip with people I really enjoy spending time in a car with. Yeah, we could floor it and head straight for our destination, but where’s the fun in that? We know where we have to stop. We know where our hotels are, and what commitments we have. But on the way, we’re going to meander. My plots are like that. I know the big stops, and in the middle, I try to have fun. The events of Once Broken Faith are a natural consequence of A Red-Rose Chain, which was a natural consequence of Chimes at Midnight, and so we march on, following the plot, hoping we can get to our hotel before they cancel the reservation.

Do Toby's increasing power levels cause difficulty in creating appropriate challenges? What's the biggest challenge in keeping the conflicts creative?

Toby actually hasn’t had that much increase in power: what she’s had is an increase in understanding. She’s my indestructible girl, which means I have to come up with new ways to make her miserable, but it turns out I have a knack for that. Otherwise, what look like increases often come with decreases. She can’t carry iron anymore. She’s had to acknowledge that her humanity is not only waning, it’s fading entirely. She has poor illusions, she’s susceptible to transformation magic…really, the trick is balance. As long as she never gets anything completely clean and clear and without cost, we’re good.


Fill out the form to enter the giveaway!  Contest open to US residents through 9/10!
Information provided will only be used for notification of winner and shipping of prize.