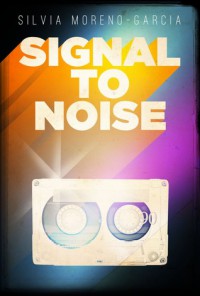 Signal to Noise is an all-to-realistic piece of magical realism.  It took me quite awhile to actually get to starting this book, languishing on my to-read list for over a year.  So I made a deliberate choice to include it as a book club pick and read it, hence it's place as my February read.

While the book gives a coming-of-age magical realism front, the story eschews many of the all-to-common patterns.  Moreno-Garcia's prose possesses a rich lyricism that fits well in a story so filled with music.  The story has its bright spots, but much of it is harsh and scrabbling, a story of friends struggling to overcome the hands they were dealt, a story of consequences, and a story of resentment.  For all of that, the story is beautifully told, but one that I personally felt reluctant to read at times, a result of seeking extra escapism in reading than normal as of late.

From Wikipedia: "Signal-to-noise ratio is a measure used in science and engineering that compares the level of a desired signal to the level of background noise. It is defined as the ratio of signal power to the noise power, often expressed in decibels."