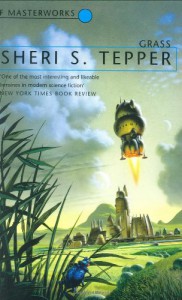 It was good for me to return to this book, ten to fifteen years since I read it last.  I think, on reflection, while I loved the story then, a lot went over my head.  Which is a bit surprising since Tepper isn't exactly subtle in this book...  Not all science fiction is political, but you can count on examinations of politics, morality, and gender in Tepper's works.  This does end up with some instances of archetypes rather than characters, but she makes it work well, in part by using an archetype with depth that other characters to reflect off of.  Some of the mystery is lost in a re-read, but there were still enough details that I missed or forgot that I hunted for clues throughout.

I throughly enjoyed my reread, and plan on hitting up the other two Arabi books in the near future.  At almost 20 years old, Grass does not suffer from anachronisms, neatly sidestepping how society and technology has changed between 1989 and now.