[Book Review] The Golem and the Jinni 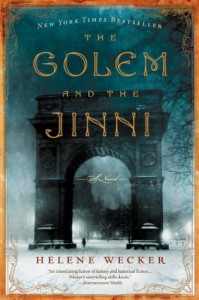 In overstated simplification, The Golem and the Jinni is a story about two improbable beings discovering themselves, and each other, in a time and a place where neither belong.  The setting is the New York of 1899, with flashes of the past lives that set the stage on which our actors perform, yet the novel has a feel of happening once upon a time.  As the golem named Chava and the jinni named Ahmed learn what it means to live as a human in a city they explore existential questions of human behavior and belief that are so alien to these creatures of myth.

The Golem and the Jinni was the August pick for Virtual Speculation.  I had previously read this book and failed to review it simply because it was one of those books that I loved yet had difficult describing or quantifying.  The story has a dreamlike quality that I feared ruining through poor description.