[Book Review] Circus of the Damned 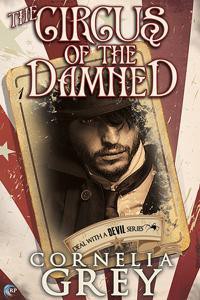 Magician Gilbert Blake has spent his entire life conning drunkards in the seediest pubs in the darkest towns, careful to hide the true depths of his power. But when he spends a little too much time in Shadowsea and the infamous slumlord Count Reuben gets wind of his abilities, hiding within the Circus of the Damned may be Gilbert’s only chance at survival.

But there’s more to the Circus than meets the eye. Every time a performer dies, a new one must take his place, or the entire circus suffers the consequences. And while the handsome ringmaster Jesse isn’t one to coerce unwilling performers into giving up their souls to the devil, a recent death in their ranks makes Gilbert exactly what they need.

Yet the longer Gilbert stays with the Circus, the more danger he seems to bring them. Being with Jesse is more than Gilbert could have hoped for, but as Count Reuben’s men continue to search for Gilbert and the Circus loses another performer, they all face running out of time long before the Devil claims his due.

I'd say Circus of the Damned comes out as a sweet and steamy, if somewhat improbable (beyond the bounds of a fantasy) novel.

Jesse belongs to the circus, bound by a pact with a devil.  As long as he and the circus abide by the pact Jesse lives on without aging, but as soon as the covenant is broken his soul and that of every performer ever part of his circus go straight to hell.  Gilbert signs his soul away to the circus as an escape from capture, not realizing that what he agreed to was no jest.  Thrown together they face an undeniable attraction, the power machinations of Count Reuben, and a fight for their souls.


It turns out that Jesse has been ringmaster of the circus for over 200 years.  The terms of the deal are as long as he keeps the circus going (with a full compliment of performers) he lives to seek his fame and fortune.  Once signed to the circus, no one leaves, ever.  Their soul stays attached to the circus (with plenty of company after so many years), but if the contract is every broken everyone goes to hell.  Not only that, but whenever someone dies Jesse basically experiences their death.  200 years seems like a long time to have kept the circus going in light of the fact that it's basically a hell soul farm.  Though I guess no one wants to go to hell while they have a chance of staying out just a little bit longer.

One thing that the author does well is create rich setting description.  She weaves together imagery pulling on the array of senses when creating the environment that the action takes place in.

The setting is not true historical, but more a fantasy vaguely historical setting that allows this story to exist.  The book is within the same world as Devil at the Crossroads, just not set in modern times.  I expect that the author will be writing more romance novels revolving around performers making deals with this particular devil.