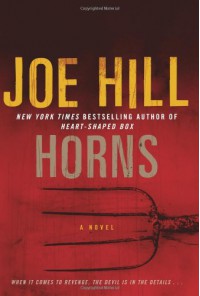 No one would be surprised to learn that Ignatius Parrish was a devil, after all they all know he was the one to murder and rape his girlfriend.  At least, no one would be surprised except the actual murderer.  So when Ig wakes up one morning with horns growing out of his forehead it's just another addition to the hell he's lived in since Merrin told him they should see other people for awhile, then was found dead the next morning.  The dark spiral of his life speeds up as the horns seem to effect those around him, confessing secret desires and impulses, taking only a signal of approval from Ig to act on them.

What unsettled me the most about the story is how believable the characters were as normal people.  That Lee's interpretation and subsequent actions sounded realistic to me.  The dark fantasy elements are laid on top of a man's life that's sunk into a personal hell, and he finally has the means to reach out and tear it apart.

I'm usually not a horror reader, so it took me a long time to get around to reading Horns the first time.  Once I started I tore through it as the story drew me in.  It's less speculative in nature than most of the Virtual Speculation picks, but I really wanted to include it nonetheless, so I slotted it in as a thematic pick for October.