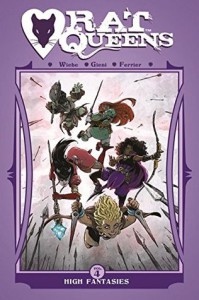 This is undoubtedly the Rat Queens I've come to love, but there's a lot missing and I don't know where it went.  It's not just the missing story between the end of Volume 3 and the beginning of Volume 4 that's jarring and confusing, no matter how happy I am to see Hannah back in the heart of things.  Even with an overarching plotline, Volume 4 reads like a series of vignettes rather than  cohesive story.  There are pieces missing, and some of those pieces belong to the very heart of the story.
Don't get me wrong, I laughed at walking in on Hannah's dad with the ghost of her mom, the adventure that boiled down to a dick joke by a bored magical frog/pufferfish/thing, and I love pretty much everything Braga.  But I know these unruly, riotous women can do more than make me laugh.  I know they can make me feel... and that wasn't here.

I'm hoping it's just a symptom of shake-up, with a dalliance with web comic form that perhaps was awkwardly handled, or just adjustments and growing pains of a re-launch.  It's a fun read, but doesn't stand as strong as the first volumes.

Advance Reader Copy courtesy of Image Comics in exchange for an honest review; changes may exist between galley and the final edition.